Cardano News 500 Cardano can Change your life: The world is on a path to mass adoption of cryptocurrency and this is an incredible move. A couple of years from now the world we know would have embraced an incredulous change as companies and governments will leverage New Opportunities. It is worth noting that not all cryptocurrencies will be influential in shaping this new world. So it’s time to take a look through your portfolio and who knows you might be missing something important. If there are any better pillars you’ll need to swallow about cryptocurrency then it should be that they have a mysterious volatile nature and have very high unpredictability values that fluctuate by the minute as they are stimulated by speculation hype and the whims of a broader economic condition.

Potential investors looking to buy in now while the market is down should grapple with the proper understanding and sufficient directives. Which will guarantee their survival but to tell the truth if you can’t stomach the market swings then you shouldn’t invest in cryptocurrency. It is an Open Secret that cryptocurrencies have seen remarkable growth stand by the outstanding growth of Bitcoin and Cardano. The field of cryptocurrencies has never been deterred from expanding while it is evident that there is a ton of reasons to be skeptical of digital currencies.

Many traditional investors have been won over in a similar way that the internet did to the world in the 1990s the blockchain space is often described as a transformative industry and this is what the world currently needs. Major Financial players are already using blockchain applications for everything from stablecoin Investments to transaction processing. A new world is fast approaching but it is necessary to note that not all cryptocurrencies will be involved in this orchestration just like a detox diet the crypto industry will be cleansed from impurities. A vast majority of cryptocurrencies will be long forgotten rug pools meme coins and projects that never gain traction will not make it to this new world simply put only a small fraction of the cryptos that currently exist will have the kind of impact that is needed to offer early investors life-changing.

It is interesting to note that Cardona Ada is never fading away. Cardano’s one of the projects that are modeling the future with real-life concrete applications that could give those who recognize its potential a run for their money and this new world will need it. Cardano is acknowledged among investors who are searching for massive return potential and is considered the favorite crypto of several investors. It utilizes a much more advanced version of transacting through staking and offers a slew of opportunities. One of the pivotal significance is it uses of digital infrastructure technology to bring Financial inclusion to Africa by giving them access to financial services.

A bureaucratic intervention not only can Cardano get to the new world but it can also create a big will for investors and Empower wealth creation for those who have not had access to it. Cardano does not look like it must be the Raging sentiment in your head right now but let’s take a deeper dive into the U.S stock market and crypto markets around the world reacted badly to the news about the U.S economic data. Which suggested that the fed’s current stance is warranted according to a report from CNBC on September 6 The Institute for Supply Management’s non-manufacturing PMI figure for August came in better than expected at 56.9 Rising months over a month. This could be an indication that the FED will have more room to hike rates without the US economy falling into a recession. This development caused Bitcoin to drop below the nineteen thousand dollar level and all coins followed its lead dipping the lower levels.

Despite the appalling situation of the crypto market, the Cardano founder Charles Hoskinson took to Twitter to offer some powerful encouraging words to Ada holders. He explained why the crypto Market has failed to reflect the excellent state in which Cardano and some other good crypto projects are in the focus needs to always be the true purpose of the technology. The problem is to solve the people it hopes the previously impossible new experiences are enabled. Cardano is changing the world thanks to all of you and our best days are ahead of us. He stated concerning Hoskinson’s confident claims Cardano’s secret weapon to thrive in the crypto industry imposed as a life changer does not seem to be helping in the Ada price spike in value. It is something else something solid and reliable.

We’re going to find out what it is. With that, you can be assured that your 500 Ada investment is completely worth it. One of those areas that input-output Global is centered on is microfinance as recorded by a report on August 30th IOG has invested in Kenyan fintech possession. Charles Hoskinson addressed this move in a statement facilitating the movement of capital and Emerging Markets to support economic growth and job creation is a core promise of blockchain and cryptocurrencies. Our vision is centered on using technology to make it easier for people across the globe to borrow and lend to each other in a regulated way. This investment in possession is an important Milestone and we are excited to be part of their gross story.

So IOG is partnering with possession to build a peer-to-peer Financial operating system for Africa. This is not the first time Cardano will make this kind of move but how do you see it as Fidelity to humanity or isn’t this what we term life-changing? Two years ago Charles Hoskinson and iohk launched a decentralized identity system known as Atala PRISM. The projects aimed at giving self-sovereign identities for accessing D5 services and granted the unbanked population around the world access to funds. Cardano is deeply interested in taking Financial Services to the unbanked from around the world estimated to be around 1.7 billion. The Cardano ecosystem is not scratching the surface to change lives it is digging deeper but this Prospect has not stopped people from taking a dig at it.

The Cardano founder emphasized that Cardano will change the world while criticizing what he sees as unnecessary clashes and competition in the crypto Market. According to Hoskinson, the Cardano network is focused on achieving its set goals and in real terms, Cardona does not need cryptocurrency to be successful to succeed. He strongly believes that Cardona has the potential of scaling into a network of billions of users without poaching Bitcoin or Ethereum enthusiasts. Reaffirming his dedication to the growth of the network Charles Hoskinson hinted that there would be upgrades and key areas of the Cardano ecosystem in the coming months. From his perspective, Cardona will make the largest contributions to governance and user experience by next year this should be the reason why he went ahead to unveil it. This is the last stage of the Cardano road map and it seems to be the key to the major problems that bedevil the ecosystem. Furthermore, Cardono has immense potential of becoming the top green coin in the market built on a proof-of-stake algorithm that eliminates minor rewards to improve the efficiency of the network.

The Catalyst could take its price to new all-time highs. The growth of cryptocurrency has been faster than ever. The increased use of crypto should Propel Regulatory Agencies and governments to take faster action thus enabling the benefits of the blockchain systems and widespread usage these processes will permeate through the entire crypto Market over the next few years. Since investors can’t stand uncertainty an overly strict regulatory framework will pose an improvement. In today’s ramshackle oversight cryptocurrencies have a bright future and Cardano Ada will definitely have a huge role to play. Cardano Ada investors were on the edge when 2022 rolled in and are currently holding on to their Investments. It is impossible to determine what will happen to Ada in the next few years to come but by fixing its Gaze on a number of its themes you can make better investment decisions. There is no remarkable investment without outstanding return and there is no new era without a significant change. With time Cardone’s prospects and goals will speak for it and this is what we call life-changing. 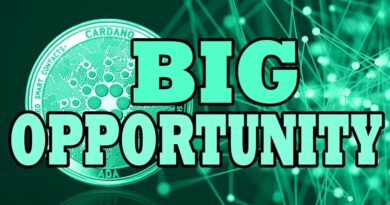 Cardano Future: ADA is Like Buying BTC at $1 Now